Completing my master’s research and the birth of my daughter has provided me with a lot more time to read. Importantly, it’s also allowed me time to read purely for pleasure. This is not to say that reading academic papers isn’t pleasurable, but let’s not kid ourselves and pretend it’s the same as reading the latest David Grossman.

With the extra time on my hands I’ve also had time to check out Literal, a new-ish app that I found via Dense Discovery and could be clumsily described as an indie Goodreads. In fact, if you’ve been clamouring to break away from the Amazon owned visual mess that is Goodreads, feel free to make use of one of my invites. They even have an importer so you can transfer your library from one site to the other.

All the features you’d expected are there: book search, ratings, reviews, a personal library and a follow based social network. By following people you create a feed of updates that includes what they have added to their library. Just like Goodreads, its a great way to find new books and no doubt a recommendations algorithm based on your interactions is on the way too.

The team at Literal are putting a lot of energy into their new book club feature which they suggest will become central to the Literal experience over time. Right now, the feature is pretty basic. It includes a feed in which only the “owners” of the club can add books, but where all club members can add content related to those books – reviews, quotes, opinions etc. It’s essentially a closed version of the main feed.

Despite this relatively underdeveloped first release, news of the feature has been enough to get me excited about the possibilities well developed online book club. I’ve been a member of a few real world book clubs during my time, and while I’ve found them all stimulating, it’s often hard to find a group of people who share similar interests. 1 The web is good at solving this problem, so the question then becomes, what feature set would a great online book club have?

One book at a time

A key issue I have with the current implementation of Literal’s book club is that members can discuss any book added to the club at any time. This means that it’s pretty easy to see spoilers or get the thoughts of another member before you’ve had time to digest the book yourself. From my experience, book clubs tend to have one of two books that the group is actively reading and there is an embargo on conversation until some agreed date in the future. Members of the club could still create content about the books being read in their own time, but this wouldn’t be revealed to the rest of the group until after the embargo date.

Make an event of it

If you’ve spent even a small amount of time on Discord or Clubhouse you’ll have seen the potential for live audio rooms to facilitate online book clubs. Agree a time in the future for the club to get together and discuss the books being read. Create a stage which a few members of the club “host” and bring up other members of the group to share their thoughts. If it sounds like a lot like an IRL book club meet up, well that’s because it is. The live audio format works incredibly well in this regard. This concept dovetails nicely with the few books at a time model too. The meet up acts as the moment at which the book is no longer embargoed and all the content created by the group’s members can be viewed by others.

A club library, not a feed

I understand why Literal would make a feed core to the club but I think a shared library is more appropriate. A feed runs into the problems of spoilers discussed earlier, where as a shared library, in which a member chooses which book they’d like read the group’s opinions on, requires an active choice. It also supports the embargoed book feature, as that part of the library wouldn’t be accessible until after the meet up. I can see each book within the club’s library getting an awesome dedicated page in which you can access the audio from the meet up (for those who couldn’t attend live), see the breakdown of the group’s ratings, read reviews and interesting highlights. 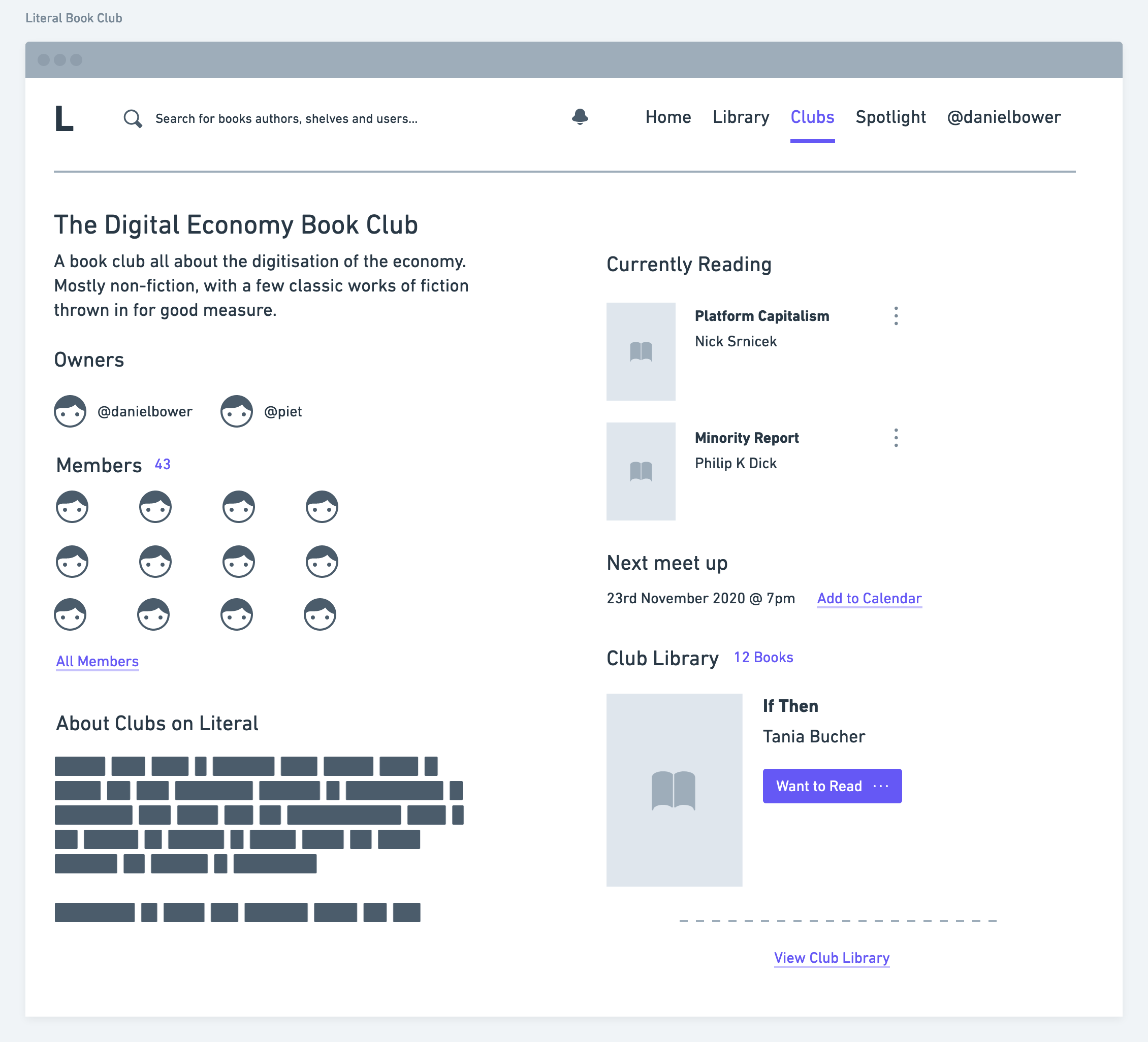 Clubs as a route to monetisation

There are a couple of obvious routes to monetising a network of global online book clubs. Affiliate networks will enable you to take a cut of books purchased via one of their links, and advertisers will be interested in targeting the audiences that form around different genres. Both, however, have the possibility to muddy the product as you inevitably start linking to Amazon (yawn) and including banners on the site (yuk).

I wonder if clubs offer an alternative route to monetisation. Clubs, at least in the way I’ve described them above, have a meaningful infrastructure cost and so it would be reasonable to make them a paid feature which scales as you join more. Paying users could also get access to exclusive events – I could imagine authors joining live audio rooms to promote their books – and also have all those annoying ads removed.

One part of post-grad life I particularly enjoyed was a lively seminar discussion. They were so much more rewarding than during my under-grad when just getting people to read the core text was a challenge. At post-grad people cared about the subject matter and had opinions they wanted to share. A book club formed around a specific interest or genre has much of the same appeal, but with a much lower cost!

I am certain that my recent university experience is influencing my thinking here, but I believe that paying a small subscription fee to access the clubs feature would appeal to a group of people who want to share their interest in a subject matter on a deeper level. It’s not quite university, but it’s a form of continuous learning that might be a bigger niche than it first appears.

1. I should note that often one of the best things about a book club is reading outside of your comfort zone because you share the club with people of different interests. ↵