Like many others, this post about the joys of RSS struck a chord with me. It immediately reminded me of what I consider to be the “golden age” of blogging – the early to mid noughties. This was a time of decent broadband penetration, cheap-ish digital cameras and new “web 2.0″ apps such as TypePad, Blogger, Technorati and Bloglines. There were countless amazing blogs too. Techcrunch was just Mike Arrington, Mark Fisher was writing k-punk, and Scott Schuman had just started snapping people in the Lower East Side. It was a time when consumption of the web was a thing that you had to actively engage with; you had to make the decision to sit down with your computer and surf, not just passively consume as we do today with our phones. Most importantly it was a time without social media as we know it. Facebook was just a thing for kids at university, there was no Twitter, and no Instagram. It was a world without snippets of content, memes and filtered images. It was perfect for blogging.

An Ode to Feedburner

Feedburner, which launched in 2004, was another app that came to symbolise blogging. For those who aren’t familiar with the service, a blogger would “burn” their blog’s RSS feed and have it converted into a Feedburner version. By doing this Feedburner could provide the blogger with simple analytics like how many subscribers they had and which of their posts were most popular. In a smart bit of marketing they also provided the blogger with a Feedburner branded “chiclet” for their blog’s sidebar that would show show their total subscriber number to passing visitors. Long before we had followers this was the vanity metric people cared about. It was a big day when Techcrunch became the first blog to pass the million mark. 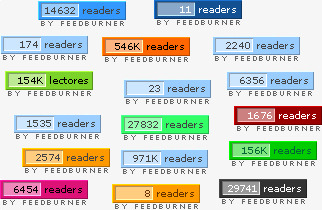 Bizarrely Feedburner is still operational. Despite being bought by Google, and despite the fact that Google shuttered Reader seven years ago, you can still sign in. Signing in is like dipping your toes in noughties era web design, it literally hasn’t changed. You can even burn feeds and get the code for your very own chiclet – I added one to my site for old times sake.

Feedburner may still work but blogging has changed. If you’re into reading blogs it’s highly likely that you’re using the excellent Feedly which handles much of the discovery process for you. And, even if you find a blog the good old fashioned way, it’s unlikely you’ll subscribe using the embedded URL, you’ll go back to Feedly and add the source through their search. None of this is a problem per se, but the second order effect of this change in consumption habit is a lack of insights for publishers.

Fortunately, Feedly are in the perfect position to fill the void left by Feedburner. They can do the basic stuff like active subscriber numbers and post popularity, but also go deeper given their control over the platform. I would be interested in:

Many lament the passing of Google Reader from the golden era of blogging, but I miss Feedburner. Without it I don’t have an easy way of knowing if my writing is resonating with the audience I have, and I lack the motivational hit that comes from watching subscriber numbers go up. This may all may sound rather trivial, but it was a vitally important part of the ecosystem we once had. I hope it is able to return in some form one day.