I think it’s pretty clear now that Google+ isn’t going to set the social world on fire. The reasons for this are plentiful and not the purpose of my post, however a central theme will be the lack of differentiation between it and it’s major competitors. That said, Google+ put some lovely user experience around it’s largely borrowed features, and in my opinion Twitter in particular should take note.

I’m talking about ‘Circles’ which were in fact ‘Lists’ done time before by both Twitter and Facebook - I’m not sure who came first. Lists allow the user to quickly filter the content they are looking at, which when you are following thousands upon thousands of people is extremely handy. What’s more lists allow you to segment what you read. Only interested in ‘Cyclists’ then just read that for a while.

What Google did was make Circles front-and-centre of it’s UE, and in beautiful way too. Every time I add someone I’m pushed into adding them to a Circle too. 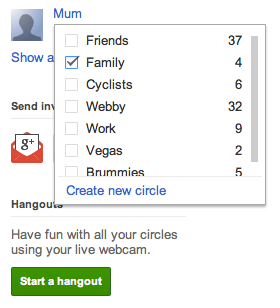 Twitter should do this too, and save me, and many other users, from the flood of coming tweets. If they don’t, I fear people may drastically reduce the number of people they follow, or move away from Twitter entirely - neither are in the bird’s best interests.

Google+ won’t become the social player they want it to be. But if they’re sensible both Twitter and Facebook could take note of some logical improvements they’ve made.